Reporting on Gender: Tips from Our Newsletter

The guidance below collects the thoughts, tips, and must-reads about reporting on gender published in our weekly newsletter, Revisions. The information is presented in roughly chronological order, has been edited for clarity, and is updated where necessary.

How should a reporter introduce a subject’s gender-neutral pronouns in a story?

The short answer is: the same way you’d introduce the pronouns of someone who uses she/her or he/him — i.e., you don’t need to formally introduce pronouns. You just use them where the sentence structure requires it and trust your audience. (And no, that doesn’t mean avoiding pronouns entirely and using the subject’s name clunkily throughout.) For instance, the singular “they” predates our modern pronoun conversations by centuries, so using they/them will be less confusing to audiences than you think, and even less so as the inclusion of gender-neutral pronouns increases. For further guidance, don’t miss the Trans Journalist Association’s style guide.

How should reporters ask sources for their pronouns in the first place?

It’s a great practice to ask the sources we interview for the pronouns they use so that we can refer to them correctly. But some of the people we talk to might be unfamiliar with the practice and might even be unsure what pronouns are. An easy way to work this into your interviews is as follows:

Just like I check the spelling of everyone’s names for my reporting, I also want to double-check what pronouns you use, like she/her, they/them, or he/him. That way, when I reference you in the story, I make sure to get it right. Could you confirm what pronouns you use?

This script a) introduces why you’re asking in the first place, b) links it to your mission to get things right, and c) provides options for anyone unfamiliar with the question. It’s also careful not to use the phrase “what pronouns do you prefer” or “identify with,” because framing respecting one’s identity as a preference we can choose to acknowledge or not is not much respect at all.

What does “culture war” mean? How can journalists use it accurately when reporting on topics of increased public debate?

“Culture war” is a phrase popularized by sociologist James Davison Hunter some 30 years ago to describe conflict over culture — our values, beliefs, and how we live — playing out in the political sphere. Issues recently given the “culture war” label by news media include laws that target parents of trans children for prosecution, barring LGBTQ and racial injustice education for children, abortion rights, and COVID-19 mitigation.

Defining these as issues of “culture” is misleading. Conflict over such issues is not debate for debate’s sake. Erasing racism and queer communities from our education system is a step toward erasing people of color and LGBTQ people from existence. Eliminating gender-affirming healthcare for kids is a step toward erasing trans adults. Barring access to abortion is a step toward controlling women’s bodies and lives. Banning measures that diffuse the effects of a deadly pandemic costs lives. These issues aren’t about “values” or “how we live,” they’re about who gets to live.

Lumping debates over whose life is worthy and free into the term “culture wars” dilutes the serious and often deadly consequences of whose “values” are enshrined into law. Journalists should avoid using this shorthand and apply the language of human rights and their violations when the issue is life and death for the “loser” of said war.

A life in quotes: bell hooks
The Guardian
Sadly, we lost author, poet, and feminist icon bell hooks in December 2021. There’s no better time to remember her immense impact and return to her work. I implore you to spend some time perusing her most memorable quotes via the Guardian and exploring a crowdsourced thread of her works available online.

Beyond pronouns: How languages are reshaping to include nonbinary and gender-nonconforming people
Minami Funakoshi, Reuters
If you’ve ever studied a language other than your first language, you may have noticed similarities or dissimilarities in how words are gendered around the world. This new interactive report from Reuters explores how different languages across the globe are (or are not) adapting to be inclusive of all genders, and it’s a fascinating read.

When Women Make Headlines
Leonardo Nicoletti, The Pudding
At Reframe we love impressive data visualization and talking about headlines, so this deeply researched piece from The Pudding on how women are represented in news headlines is right up our alley. The authors of this study found some fascinating similarities and differences in how women make the news in India, South Africa, the U.K. and the U.S.

How one Mexican magazine adopted inclusive language in Spanish
Hanaa’ Tameez, Nieman Lab
Using gender-neutral language can be a challenge for anyone used to masculine generalizations (think “congressman” instead of “congressperson”). But this is especially challenging in languages like Spanish where grammatical rules dictate that most nouns and adjectives are gendered by default. Nieman Lab interviewed the editors at Mexican magazine Chilango to learn how they introduced inclusive language to their audiences. The story is full of lessons for any content-focused organization. 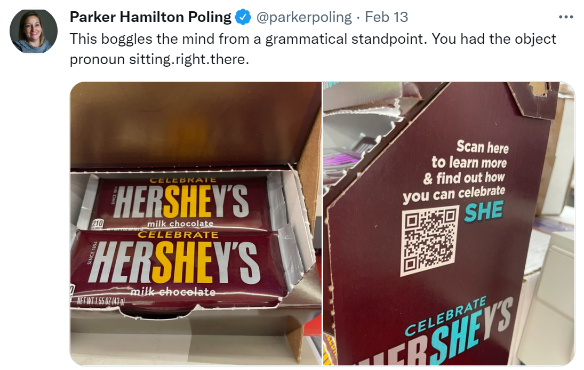 A little language levity as a palate cleanser. It was right there, Hershey! New York Magazine released a cover story in June 2022 with the headline “Canceled at 17.” It tells the tale of a teen boy who shared nude photos of his ex-girlfriend with other students and was subsequently ostracized by his peers. There’s plenty wrong with this story — as many have pointed out on Twitter, there are many young girls who have been similarly abused or worse and became the ostracized ones without receiving a major cover story in their defense.

But the headline is particularly disingenuous.

According to the story, the boy in question faced few consequences for violating his ex-girlfriend besides ostracization — at his school. However he did attend four proms and is headed off to college. Moreover, the “mistake” in the subheading was the sharing of nude photos of a minor without consent, and it’s hard to track whether teenagers “never forgive” after one tumultuous year.

The real issue at the heart of the story is that young people are looking to hold each other accountable for abuse and harassment that has often been swept under the rug, and, as teens, do not yet have the wherewithal, support, or resources to do that effectively. In this case it also seems the adults in the room often spent more time consoling the “canceled” than addressing the reasons their peers were calling them out. But dismissing these attempts at peer justice, however messy, as “cancel culture” because our society hasn’t found nuanced enough vocabulary to distinguish between a desire for accountability and the weaponization of it is unfair. A better headline, for a fairer story, might look like the following:

“Canceled” or facing consequences? Teens seeking justice among peers grapple with adults who don’t know how to help

Earlier this week, students at over 90 schools across Virginia staged a walk-out in protest of new guidelines from Gov. Glenn Youngkin that privilege parents’ determination of their children’s name, pronouns, and gender expression in school. The guidelines also force students to use facilities that match their “biological sex” and allow school employees to reject students’ chosen names or pronouns.

The headline above, from NBC Washington, refers to these new guidelines as “Youngkin’s School Transgender Policy.” Clearly the policy does in fact revolve around transgender students — each part of it seeks to control gender expression in a different way, which will have the most impact on trans students.

But there’s no way to read these guidelines that suggests this will be anything but harmful to trans students or any students expressing themselves beyond traditional binaries. Following that logic, it is a fact that this impact will be negative.

Thus, the headline from The Cut, below, is more apt. The policies are explicitly “Anti-Trans” and journalists should not be afraid to state that plainly. The object of Youngkin’s policy is clear and the impact is wholly predictable. It’s time we call it what it is.