Reporting on LGBTQ Communities: Tips from Our Newsletter

The guidance below collects the thoughts, tips, and must-reads about reporting on LGBTQ communities published in our weekly newsletter, Revisions. The information is presented in roughly chronological order, has been edited for clarity, and is updated where necessary.

How should a reporter introduce a subject’s gender-neutral pronouns in a story?

The short answer is: the same way you’d introduce the pronouns of someone who uses she/her or he/him — i.e., you don’t need to formally introduce pronouns. You just use them where the sentence structure requires it and trust your audience. (And no, that doesn’t mean avoiding pronouns entirely and using the subject’s name clunkily throughout.) For instance, the singular “they” predates our modern pronoun conversations by centuries, so using they/them will be less confusing to audiences than you think, and even less so as the inclusion of gender-neutral pronouns increases. For further guidance, don’t miss the Trans Journalist Association’s style guide.

How should reporters ask sources for their pronouns in the first place?

It’s a great practice to ask the sources we interview for the pronouns they use so that we can refer to them correctly. But some of the people we talk to might be unfamiliar with the practice and might even be unsure what pronouns are. An easy way to work this into your interviews is as follows:

Just like I check the spelling of everyone’s names for my reporting, I also want to double-check what pronouns you use, like she/her, they/them, or he/him. That way, when I reference you in the story, I make sure to get it right. Could you confirm what pronouns you use?

This script a) introduces why you’re asking in the first place, b) links it to your mission to get things right, and c) provides options for anyone unfamiliar with the question. It’s also careful not to use the phrase “what pronouns do you prefer” or “identify with,” because framing respecting one’s identity as a preference we can choose to acknowledge or not is not much respect at all.

What does “culture war” mean? How can journalists use it accurately when reporting on topics of increased public debate?

“Culture war” is a phrase popularized by sociologist James Davison Hunter some 30 years ago to describe conflict over culture — our values, beliefs, and how we live — playing out in the political sphere. Issues recently given the “culture war” label by news media include laws that target parents of trans children for prosecution, barring LGBTQ and racial injustice education for children, abortion rights, and COVID-19 mitigation.

Defining these as issues of “culture” is misleading. Conflict over such issues is not debate for debate’s sake. Erasing racism and queer communities from our education system is a step toward erasing people of color and LGBTQ people from existence. Eliminating gender-affirming healthcare for kids is a step toward erasing trans adults. Barring access to abortion is a step toward controlling women’s bodies and lives. Banning measures that diffuse the effects of a deadly pandemic costs lives. These issues aren’t about “values” or “how we live,” they’re about who gets to live.

Lumping debates over whose life is worthy and free into the term “culture wars” dilutes the serious and often deadly consequences of whose “values” are enshrined into law. Journalists should avoid using this shorthand and apply the language of human rights and their violations when the issue is life and death for the “loser” of said war.

Beyond pronouns: How languages are reshaping to include nonbinary and gender-nonconforming people
Minami Funakoshi, Reuters
If you’ve ever studied a language other than your first language, you may have noticed similarities or dissimilarities in how words are gendered around the world. This new interactive report from Reuters explores how different languages across the globe are (or are not) adapting to be inclusive of all genders, and it’s a fascinating read.

In February 2022, Texas governor Greg Abbott sent a letter directing the Texas Department of Family and Protective Services “to conduct prompt and thorough investigations of any reported instances of Texas children being subjected to abusive gender-transitioning procedures.” Journalist Vivian McCall’s thread on the announcement is a must-read; she explains how politics-as-a-game coverage has led to such a terrifying moment for trans Texans. 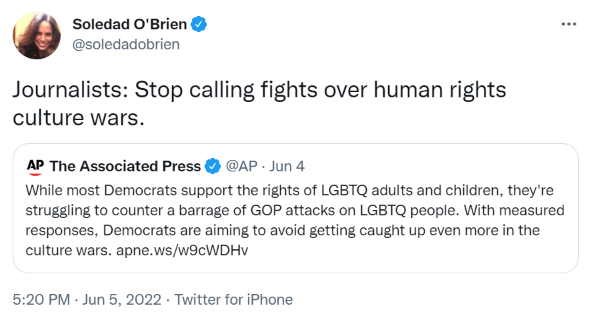 If we’ve said it once, we’ve said it a thousand times, and now veteran broadcaster Soledad O’Brien is saying it, too. If one group wants another group to cease to exist, their argument is not about “culture,” it is about who gets to live. 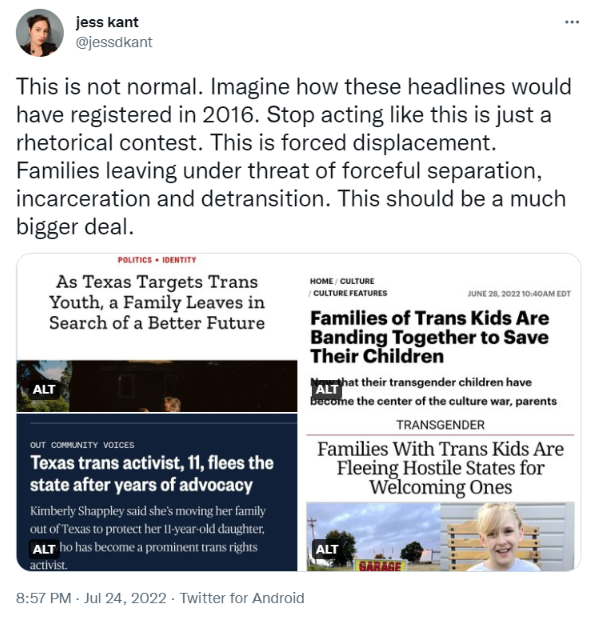 Here social worker and lecturer Jessica Kant has collected a series of headlines reporting the displacement of families due to anti-trans legislation. It paints a bleak picture — but one that’s easy to miss when reading individual or episodic stories. Groups of similar stories like this help us understand systemic issues in a way that episodic stories do not. The pattern here is clear: individual and dispersed state laws that have criminalized trans healthcare have collective effects that stigmatize, threaten, and displace trans people across the country. And yes, this should be a much bigger deal. 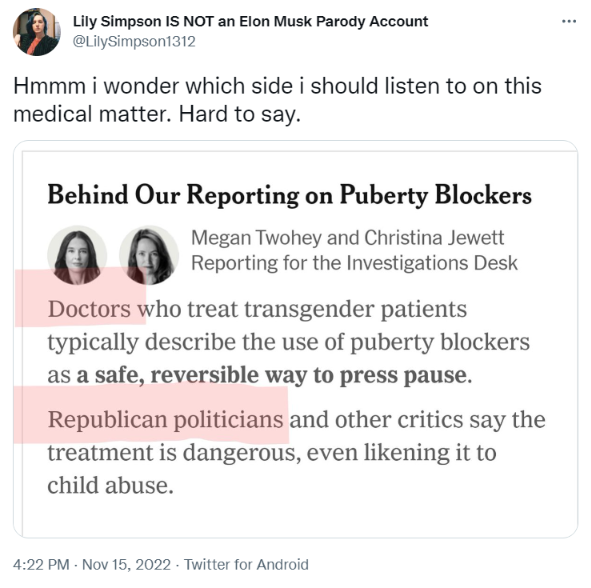 In this tweet, YouTube creator Lily Simpson added emphasis to a clip from a recent New York Times story on puberty blockers. The framing of this behind-the-scenes tidbit directly positions doctors against Republican politicians, as if both groups’ statements hold the same weight in medical discussions. This is the type of absurd “bothsidesism” that normalizes attacks on marginalized groups. Illuminating dissenting opinions on high stakes topics is an important part of journalism. But partisan opinion should not be presented, visually or textually, as equal to subject expert opinion and scientific fact.

The headlines below refer to the bill signed by Florida Gov. Ron DeSantis (R) which, as the Washington Post reports:

“…[bans] instruction or classroom discussion of ‘sexual orientation or gender identity’ for kindergartners through third graders in public schools. It also empowers parents to sue school districts over teachings they don’t like, and requires schools to tell parents when their child receives mental health services.”

After the bill passed, the Walt Disney Co. released a statement condemning the bill and asking for it to be repealed. Both of the headlines below frame these events very differently.

The headline above, from a Los Angeles Times story syndicated by the Pittsburgh Post-Gazette, combines two harmful tropes of political coverage. First, it uses the word “feud” to describe a very uneven conflict. As MSNBC’s Mehdi Hasan and NYU’s Jay Rosen have discussed on Twitter, calling this a “feud” creates a false equivalence between Disney and DeSantis’ actions. DeSantis and his party have led a bad-faith campaign accusing the company of being “groomers” who support child abuse and made moves to remove the company’s self-governing status in the state. Disney, on the other hand, put out a late, three-sentence statement. These actions are not proportional.

Second, the use of the term “culture war” to vaguely refer to the long fight for equal rights for the LGBTQ community is delegitimizing. As I’ve written previously in this newsletter, “Lumping debates over whose life is worthy and free into the term ‘culture wars’ dilutes the serious and often deadly consequences of whose ‘values’ are enshrined into law.”

The headline above, from Vanity Fair earlier in the month, gets it right. It calls DeSantis’s actions “threatening” and refers to Disney’s actions as “spoke out.” These terms accurately describe those actions without implying they are of equal weight. The headline also refers to the bill as “Anti-LGBTQ,” putting the true goal of the bill in harsh relief rather than referring it to as a “culture war.”

Earlier this week, students at over 90 schools across Virginia staged a walk-out in protest of new guidelines from Gov. Glenn Youngkin that privilege parents’ determination of their children’s name, pronouns, and gender expression in school. The guidelines also force students to use facilities that match their “biological sex” and allow school employees to reject students’ chosen names or pronouns.

The headline above, from NBC Washington, refers to these new guidelines as “Youngkin’s School Transgender Policy.” Clearly the policy does in fact revolve around transgender students — each part of it seeks to control gender expression in a different way, which will have the most impact on trans students.

But there’s no way to read these guidelines that suggests this will be anything but harmful to trans students or any students expressing themselves beyond traditional binaries. Following that logic, it is a fact that this impact will be negative.

Thus, the headline from The Cut, below, is more apt. The policies are explicitly “Anti-Trans” and journalists should not be afraid to state that plainly. The object of Youngkin’s policy is clear and the impact is wholly predictable. It’s time we call it what it is.