Reporting on U.S. Elections: Tips from Our Newsletter

The guidance below collects the thoughts, tips, and must-reads about reporting on U.S. elections published in our weekly newsletter, Revisions. The information is presented in roughly chronological order, has been edited for clarity, and is updated where necessary.

On January 19, 2022, the U.S. Senate failed to advance legislation to expand voting access and a change to Senate rules that would allow the legislation to pass failed by a 52-48 margin. All of the Republicans in the Senate, as well as two Democrats, Kyrsten Sinema and Joe Manchin, made this happen. As with any big news event, it’s critical that reporting on this centers both those responsible for the action in question and who those actions will impact.

The headline above, from CNN, focuses the story on Democrats’ “defeat.” This plays into the politics-as-spectator-sport framing of legislation that erases the very real people who are impacted by the actions of Congress as if it’s all just a game. (Were Democrats defeated, or were voting rights for the entire country defeated?) It also obscures the Republican party’s prominent role in the outcome of last night’s debate by assigning no actor to the failed vote.

By contrast, this headline from CNBC, properly positions the actor and the act: Republicans blocked the voting rights bills alongside Sinema and Manchin. While it’s certainly relevant that two Democrats also blocked these bills, the emphasis should be on Senate Republicans. The press often takes for granted that all legislation should split along party lines and thus focuses on outliers who cross the aisle. In reality, any of the 50 Senate Republicans could have chosen to alter Senate rules to expand voting rights and chose not to, and in news coverage those 50 should receive as much responsibility for this outcome as Sinema and Manchin.

The New York Times reported that, after the 2020 election, Donald Trump asked his lawyer, Rudy Giuliani, “to ask the Department of Homeland Security if it could legally take control of voting machines in key swing states.” That, apparently, was after asking the Attorney General if the Justice Department could do it.

So it sounds like the former president had quite a specific, prominent role in the attempt to seize voting machines: asking those on his team to do something completely unprecedented in U.S. democracy. It’s curious that the Times would describe it so vaguely in their headline, above. We always prefer precision here, making the Guardian’s reporting on the Times’ discovery, below, a better option.

The headline above, from CNN, is from a report on newly released body camera footage of the arrests of Florida residents who allegedly committed voter fraud in 2020. Those facts — footage was released, residents were arrested, and for those alleged crimes — are true. But they don’t tell the whole story.

These arrests were the work of the new Florida Office of Election Crimes and Security created by Governor Ron DeSantis this year. In some cases, as the Tampa Bay Times reported, the arrests are clearly the result of a confusing rollout of a 2018 state constitutional amendment restoring the right to vote for many felons. It’s also unclear whether any of those arrested willfully committed fraud, which is how the state law defines the crime. These arrests also happened just hours before a press conference DeSantis led to promote this new initiative.

The headline from CBS News below paints a fuller picture of what’s going on here. It attributes the arrests to the work of DeSantis, hinting at the aforementioned context, and underlines the confusion at the center of the events. As always, the more context, the better for the audience.

Earlier this week, Senate candidates John Fetterman and Mehmet Oz participated in a live televised debate. The fact that Fetterman is recovering from a stroke he experienced in May was front and center in a lot of debate coverage. His speech and auditory processing were affected by the stroke which, as much-discussed after a recent NBC News interview, means he has used closed captioning accommodations for such events.

Of course one’s presentation during a live debate will factor into how audiences interpret the “winner” — Nixon vs. Kennedy taught us that. But journalists have an incalculable impact on public discourse surrounding political events. That’s why it’s important that we don’t put our thumbs on the scale by centering style over substance, as the headline from The New York Times’ live blog above exemplifies.

Fetterman’s recovery is part of his campaign story, so it’s no surprise its impact on a live debate would be part of the conversation. But, considering his primary care physician has attested to Fetterman’s fitness for office, a focus on his disability in coverage has very little purpose besides advancing harmful ableist narratives. As reporter Michael Hobbes pointed out on Twitter, this type of coverage also encourages voters to focus more on optics than impact.

A headline from The Philadelphia Inquirer’s live blog below gets it right by focusing on the issues and policies Fetterman and Oz discussed. That’s what debates are for, after all: determining candidates’ standings on the issues that impact voters — not their style of speech.

Before the U.S. Federal Reserve raised target interest rates in November 2022, CNN and CBS News both previewed the change online. The headline above was featured on CNN’s homepage the afternoon of the announcement. It gets the main point right, of course — the “hike” was historic. But it frames the event as “a problem for Biden,” presumably in that it would impact his approval ratings or his party’s election chances.

That may be true, of course, and considering November’s elections it may even be a relevant point to some. But, as research has shown, reporting that frames public issues as just fodder for the political game sows distrust among the public — in both the news and politicians.

CBS News’s take, below, not only piques the interest of the public by being service-oriented. It also reframes the Fed’s move as one that impacts people over politics. Yes, everything is political; but erasing voters from the conversation is just plain bad for civic engagement.

‘Horse race’ coverage of elections: What to avoid and how to get it right
‘Horse race’ coverage of elections can harm voters, candidates and news outlets: Research
Denise-Marie Ordway, Journalist’s Resource
“Horse race” elections coverage is characterized by a focus on who is likely to win an election, including an emphasis on opinion polls, at the expense of what policies the candidates espouse and whether they’re popular with voters.

If Trump runs again, do not cover him the same way: A journalist’s manifesto
Margaret Sullivan, The Washington Post

“Prebunk” election denialism for your audience.

“Prebunking,” a riff on debunking, means proactively explaining media manipulation techniques for audiences so they can recognize them in the wild. A new study shows this strategy is very effective in “inoculating” folks against misinformation. In addition to providing ample fact-checks on candidates, this “prebunking” method is a tool newsrooms should add to their midterm election plans.

What should you be “prebunking”? Election denialism is a good place to start. FiveThirtyEight recently reported that more than half of Americans will have an election denier on the ballot this fall. We can easily predict based on previous elections that losers of races will call the winners (and even the entire electoral system) into question. This will happen at local and national levels. In fact, some candidates are already laying the groundwork for 2024.

Start a “prebunk” for your audience right now and publish it before the midterms. Make sure it’s prominently displayed past its publication date. Explain how your local voting system and elections work and highlight true voter fraud cases or lack thereof. Explore the hypocrisy of elected officials calling into question the same system that got them elected. This can help “vaccinate” your audience against the coming wave of election denialism.

Anti-democratic
This is the appropriate adjectival form to describe an action or event that is in opposition to democracy. However, it does bring to mind the democratic process rather than the institution of democracy — as in, against the spirit of democratic elections versus against the idea of democracy as a form of government. It also might be read as “big D” Democrat. In some cases, then, “anti-democracy” may be more appropriate and to the point.

Election denialism/deniers
Like climate denial, this is a misnomer for those who have access to information that supports one view but continue to support the opposing view instead for their own gain. We may not be able to certify the intent of those “denying” the results of an election, but we don’t have to ascribe intent in order to describe impact.

Where forms of “deny” imply that someone believes something to be untrue, the word “oppose” doesn’t try to ascertain beliefs and describes the impact of their statements instead. This and similar substitutions can work in the following ways:

Journalist Wesley Lowery sums up what many who study and critique media were thinking during Election Week 2022. The question remains: how do we bring the dominant narrative closer to reality? 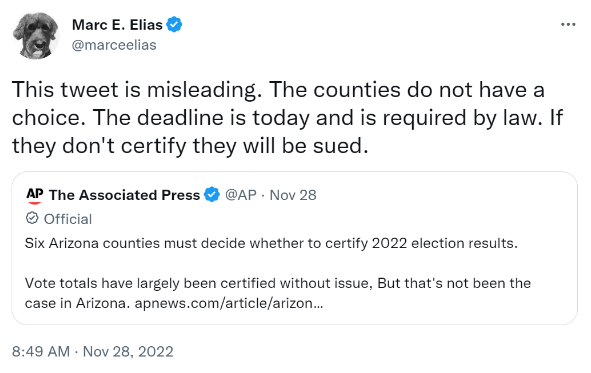 Democracy Docket founder Marc E. Elias’s correction is important. The AP’s framing of certifications as a choice — rather than something the county is obligated to do — normalizes attacks on the democratic process by partisans who reject other parties’ wins.